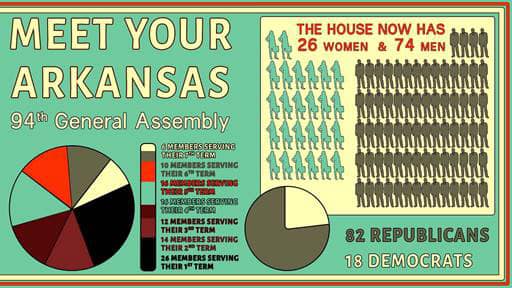 As we approach a new year, with new goals for the next legislative session, we would like to take a moment to reflect on the progress made in 2022.

In an Extraordinary Session held in August of this year, the General Assembly passed Act 1 and Act 2. Those acts are identical pieces of legislation that reduced the income tax to 4.9% and made that rate retroactive to January 1, 2022. The legislation also lowers corporate income taxes from 5.9% to 5.3% on January 1, 2023. In addition, it aligns Arkansas law with the federal depreciation schedule which will provide relief for business owners by accelerating the depreciation of their assets and allowing for an easier calculation of their tax bill. Act 1 and Act 2 also grant a nonrefundable income tax credit of $150 to taxpayers with income up to $87,000 and $300 to couples filing jointly with income up to $174,000.

In this special session, the General Assembly also passed Act 3. This act set aside $50 million from the revenue surplus for the purpose of funding a school safety grant program.

In March of 2022, the 93rd General Assembly convened for the 2022 Fiscal Session. During this session, the General Assembly passed a $6.02 billion budget. The budget outlined a $70 million increase for elementary and secondary education. The budget also included increases for the DHS Division of Children and Family Services, county jail reimbursements, and state police.

The 94th General Assembly will convene at noon on January 9. On the first day of the session, all members will be sworn into office. House members will then formally elect the Speaker of the House. The Speaker will then make remarks and announce the chairs for House committees.

On the second day of the session, the House and Senate will convene for a Joint Session. On this day, all constitutional officers will be sworn into office and the newly elected Governor will make her first address as Governor.

The House streams all committee meetings and House floor proceedings at www.arkansashouse.org.