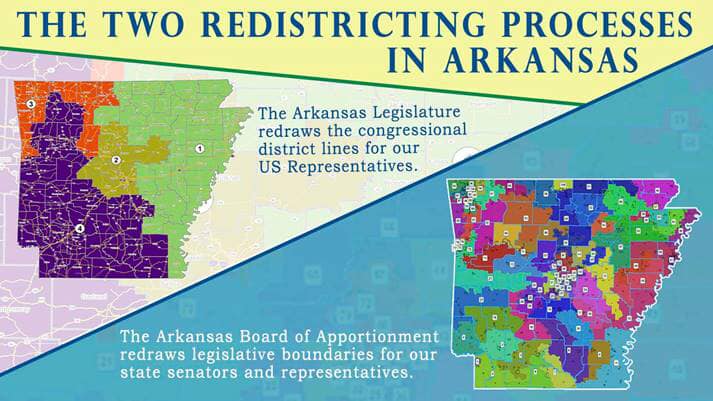 One of the many legislative issues that will be before us in the 2021 Regular Session is redistricting.

Redistricting is an important part of our democracy. It is required by law once every ten years after the Federal Census.

There are two separate processes for redistricting in Arkansas.

One process is redrawing legislative boundaries for our state senators and representatives. This is the responsibility of the Arkansas Board of Apportionment.

The Board of Apportionment is made up of the Governor, the Attorney General, and the Secretary of State. The Board will be redrawing 100 State House & 35 State Senate Districts so that each district meets various legal criteria, including each district being about the same size in population.

The other redistricting process is our responsibility.

Using census data, both chambers of the state legislature must approve a single redistricting plan. The process in the House will begin in the State Agencies and Governmental Affairs Committee.

The governor may veto the lines drawn by the state legislature.

As with state legislative districts, some congressional districts may expand geographic boundaries while others may shrink depending on population changes.

Districts over time may change demographically. That’s why it is important they are redrawn every ten years. The goal is to ensure each district has about the same number of people and reflects diverse communities.

Census bureau information is expected to be released in the spring. As a result, redistricting is typically one of the final items addressed toward the end of the session.

You can watch this process in real-time as we live stream all committee meetings.