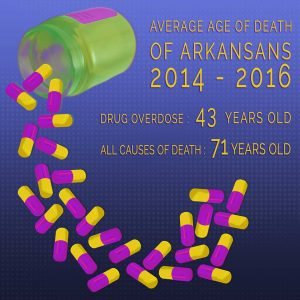 In short, drug overdoses are killing us. Nearly 116 Americans die each day from an overdose of a legal opioid prescription pain killer or a lethal dose of illegal heroin.

The young age at which many drug overdoses occur increases the burden these deaths place on our communities. Between 2014 and 2016, the average age of a drug overdose decedent was 43 years. During the same time period, the average age at death from all causes was 71, which means that overdoses shortened many people’s lives by close to three decades The issue is complex, baffling, and heart-breaking.

In the 2019 Drug Threat Assessment Report from the Drug Enforcement Agency (DEA), methamphetamine is cited as our state’s most significant drug threat. The use of pharmaceutical drugs like Oxycontin and Hydrocodone continues to increase posing another significant threat. And now heroin use is slowly but inexorably increasing.

According to the report, the continued growth of heroin appears to be a direct result of the abuse of pharmaceutical drugs, whose abusers transition to the drug due to the price and availability. Adding to the already increasing concerns of the drugs dangers, law enforcement is finding that half of all heroin confiscated in the state is laced with fentanyl.

Arkansas is certainly not alone in this struggle. In fact, just this week at the National Conference of State Legislatures (NCSL), legislators from around the country shared what their government is doing to combat this growing epidemic. We will continue to study effective policies in other states to determine what legislation may be needed in 2019.

In the last session, we passed Act 284. This allows pharmacists in Arkansas to order, dispense and/or administer naloxone without a prescription. It provides greater access to more Arkansans and first responders in the event of a drug overdose.

There are positive developments when it comes to our state’s battle with drug use. In the last 5 years, drug abuse rates among our youth has declined every year. We look forward to seeing this rate decline.

If you or a family member is struggling with addiction, we encourage you to visit. www.artakeback.org. This site has valuable information on opioid addiction and links to treatment centers across the state.