There were 887 new cases and 22 deaths reported at today’s COVID-19 daily update. This is the largest number of deaths reported in a 24 hour period since the health crisis began.

Hospitalizations have increased by 10.

The counties with the highest number of new cases are as follows:

The Arkansas Department of Correction announced it has now tested all inmates and staff in correctional facilities. Of the 14,650 inmates, there were 5,120 who tested positive. However, the positivity rate in the most recent testing has been less than 5%.

Since the pandemic began, the prison population has been reduced by 10% through early release and fewer intakes.

The Arkansas Department of Health issued a warning about recent scams. The agency is reminding Arkansans that legitimate case investigators and contact tracers will always have identification and will never ask for money. If you want to verify that you have been contacted by ADH you may call 1-800-803-7847.

ADH is also reminding athletes that an end of a quarantine period does not mean they are cleared to play. Athletes must be cleared by a physician before resuming play.
It was also announced today that the unemployment rate in Arkansas for the month of July was 7.1%. That is down from 8.1% in June. 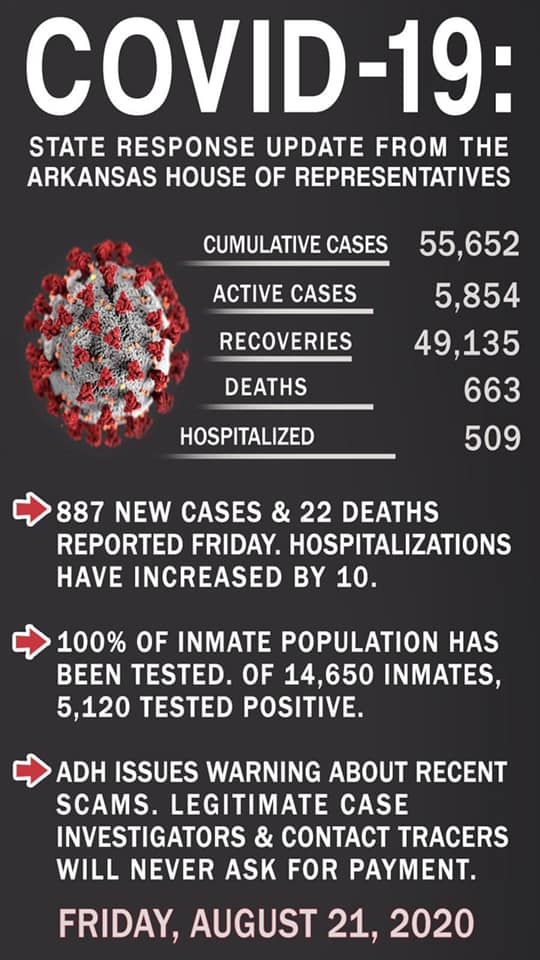